Building a new house: Initial steps to designing and getting approval to construct your house in Nepal 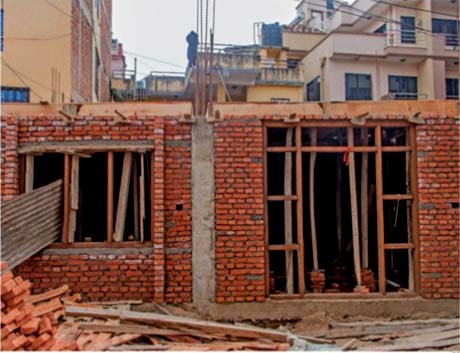 Building a home is exciting and one of the largest investments that an individual makes in a lifetime. Even after acquiring land, building a house is not a simple endeavor and there are a lot of processes involved before and after commencing the construction process. There are various responsibilities that the home owner needs to take throughout the process, first and foremost being designing the layout of the house that one wants.

To start off, there are different architectural and engineering firms in Kathmandu, who provide services such as making conceptual, structural and construction drawings. The design must abide by the National Building Code and for designing a house it is mandatory to hire a professional registered in Nepal engineering Council listed in the municipality office.

Nani Ram Thapa, a retired government engineer shares, “The buildings are designed taken into consideration the site, the area available and the client’s requirement for amenities.” Similarly, it is important for you to sit down with your home designer and put forth your ideas, as it is you who will be living there. Taking into account the individual’s needs and building bylaws, the designer will prepare the final sketch of the house which needs to be passed by the concerned authority.

The design must abide by the building codes introduced by the government. The new urban planning and building construction by laws 2015 forbids new housing taller than three storeys and makes it mandatory for houses to be one and a half metres apart at minimum. According to the bylaws, buildings up to 10 metres high have to leave a setback of 1.5 metre from the border of the land plot. Similarly, the house needs to be designed leaving a minimum of three metres from the centre of the road connecting the house with regard to the right of way. Similarly, more than 70 per cent of a land cannot be covered by residential houses for plots up to 250 sq metres.

After the design is sketched, the process of acquiring the building permit needs to be carried out. The construction design should initially be registered through Electronic Building Permit System (E-BPS) in the municipal office by the designer. The design personnel listed in the municipality office is given a password which the designers must use to scan the documents and forward it to the municipal office. After the digital entry is done, the home designers are required to bring printed versions or hard copy of the building designs and submit it to the concerned municipality. Various identity, ownership proof, architect certification et cetera needs to be submitted to the municipality office.

After the registration process, one needs to pay the building permit fee or tax for residential house which is Rs 12 – including Rs 2 refundable deposit – per sq ft. The municipality office then forwards the file to ward offices to issue 15 days notice to the site’s neighborhood. Thapa informs, “If the neighbourhood has any objection regarding the construction of the house they have a right to file a complaint.” After the completion of 15 days, the condition of the site is surveyed by municipality’s official, ward’s official and ward’s chairperson or a representative appointed by him. After this is done, the municipality starts the process of temporary approval of the drawings, where the individual can proceed ahead to carry out the construction of the plinth level of the house.

He adds, “The individual must apply to obtain a permanent or final building permit it which is only given after the government officials check the site to see if the plinth level is constructed according to the design submitted beforehand.” The design is then passed, marking the approval to proceed with the construction. “If the documents are submitted on time and everything goes about smoothly, the process takes a month at a minimum to carry out,” he informed.

AFTER THE MASSIVE EARTHQUAKE, SALES OF APARTMENTS HAVE COME TO...
Continue reading
by teraigharjagga

This site uses Akismet to reduce spam. Learn how your comment data is processed.

Please enter your username or email address. You will receive a link to create a new password via email.